myBTCnetwork | Bitcoin Collapse and the Crisis in the Financial Markets With Live Updates: Opinions, Estimates, Forecasts

Bitcoin Collapse and the Crisis in the Financial Markets With Live Updates: Opinions, Estimates, Forecasts

On Friday (UTC time zone), March 13, Bitcoin’s price at some point fell to $3,800, having lost more than 50% of its value overnight. Ethereum's price dropped below $100 for the first time since December 2018. Read all about current market events and opinions in our live broadcast (the most recent news at the top). 16:00 UTC. Over the past few hours, the price of Bitcoin has again gone down, at some point dropping below $5,000 again. By this minute, Bitcoin is trading at around $5,200. 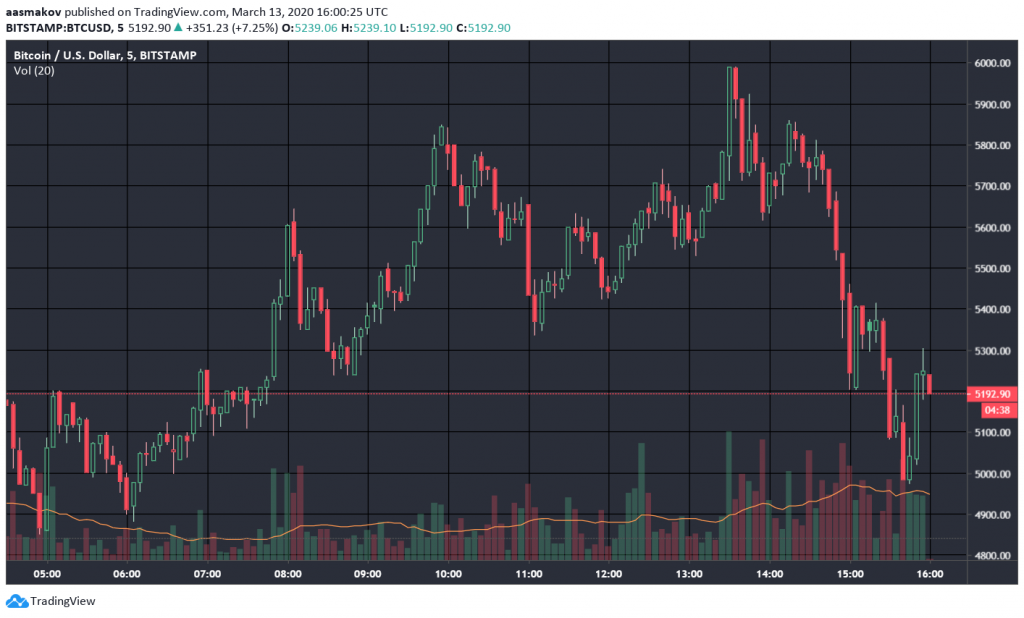 “Of course, Bitcoin’s collapse cannot be good for miners. Everyone is trying to stay calm and hope that this plunge is temporary. The question is how the network and complexity will react. If the situation drags on, owners of outdated equipment, such as Antminer S9, will have to turn off their devices. Owners of more advanced equipment will have to start thinking about improving mining efficiency and reducing the cost of electricity in the long term.”

According to Dovey Wan, partner at Primitive Ventures, coronavirus is receding outside the Hubei province. https://twitter.com/DoveyWan/status/1238383037378781186 The leading indices show moderate growth. 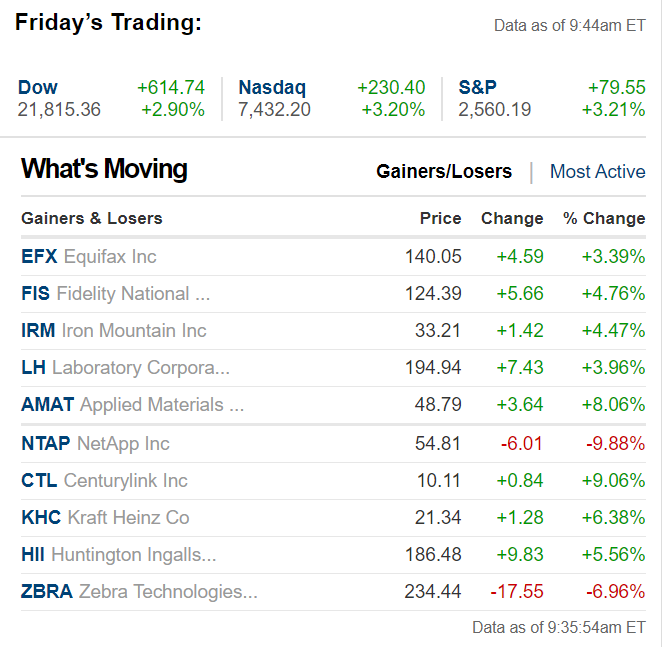 In South Korea, short selling will be banned for 6 months starting on March 16. Coinmetrics reports that the ratio of market capitalization and realized capitalization has gone below 1 for the fourth time in history. The former index fell 46% this week, while the former only fell 3%. Coinmetrics notes that this means that long-term investors are not selling. https://twitter.com/coinmetrics/status/1238454080827203586 The U.S. stock market opened with an optimistic trend. https://twitter.com/markets/status/1238457390858715136 13:00 UTC, Bitcoin is trading at $ 5,610. 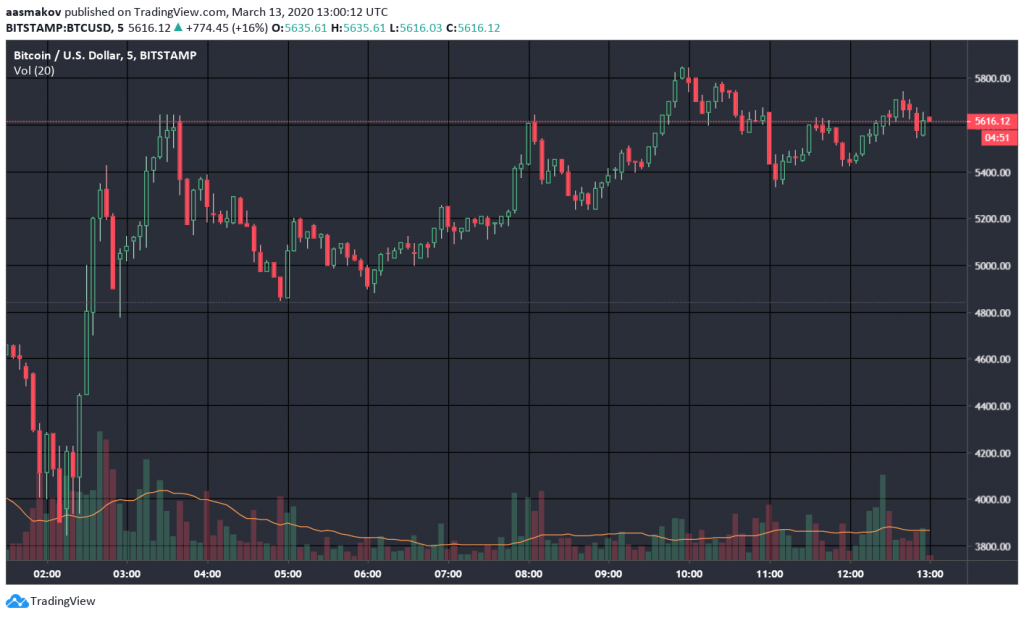 “This is how investors react to general economic issues. The cryptocurrency market failed to become a safe haven for traders this time. The previous time the exchanges were overwhelmed by those who wanted to hide from the collapse, and prices for digital currencies dropped. This time, the flow of sellers was even more powerful. Exchanges stop trading when they see that the volume of bearish orders is growing exponentially, which is associated with people’s emotional response and has little to do with the real situation. To decrease tension trading is being suspended. BTC and a number of altcoins are trying to rebound, but it looks ineffective because the external background has not changed for the better and the problems have not gone away. Fiat assets remain under pressure. Asia traded in the red, for example. Brent oil prices are adjusting and aiming at $35, but this is another attempt to take into account the technical signal and nothing more. The Russian stock market is in positive territory, futures for the S&P 500 index in the "green" zone, which is not bad. "

“Firstly, Binance and BitMEX disconnected a minute before the first price drop, which is telling. Secondly, the cost of Bitcoin after halving at the end of the year will be about $10,000. In order to buy a large amount of cryptocurrency, you must first create a wave of sales, create a stream of those who funnel it to you. Previous to very large purchases in a narrow market, such a sharp drop most often occurs. At current levels, it’s a great opportunity to buy Bitcoin.”

The US Federal Reserve has decided to inject $1.5 trillion into the financial system to calm the panic in the markets caused by the spread of coronavirus. Other central banks also contribute to the normalization of the situation in the financial markets. The Reserve Bank of Australia poured $8.8 billion into the banking system through short-term repos. Bank of Canada announced yesterday that on March 17 it would hold a repo with a maturity of 168 days in the amount of $4 billion and a maturity of 350 days in the amount of $3 billion. In an attempt to reanimate the country's economy, which suffered from the coronavirus epidemic, the People's Bank of China will offer assistance to local financial institutions in the amount of $79 billion. https://twitter.com/business/status/1238409727941410818 Social networks are actively discussing the cost of mining per 1 BTC. Opinions vary, but many argue that at the current price, miners should be turned off. https://twitter.com/caprioleio/status/1238399537724751872 Data on mining costs: https://t.me/gfoundinshit/3561 An interesting comparison of the depth and speed of the stock market’s fall during the crisis of 2001, 2008 and 2020. 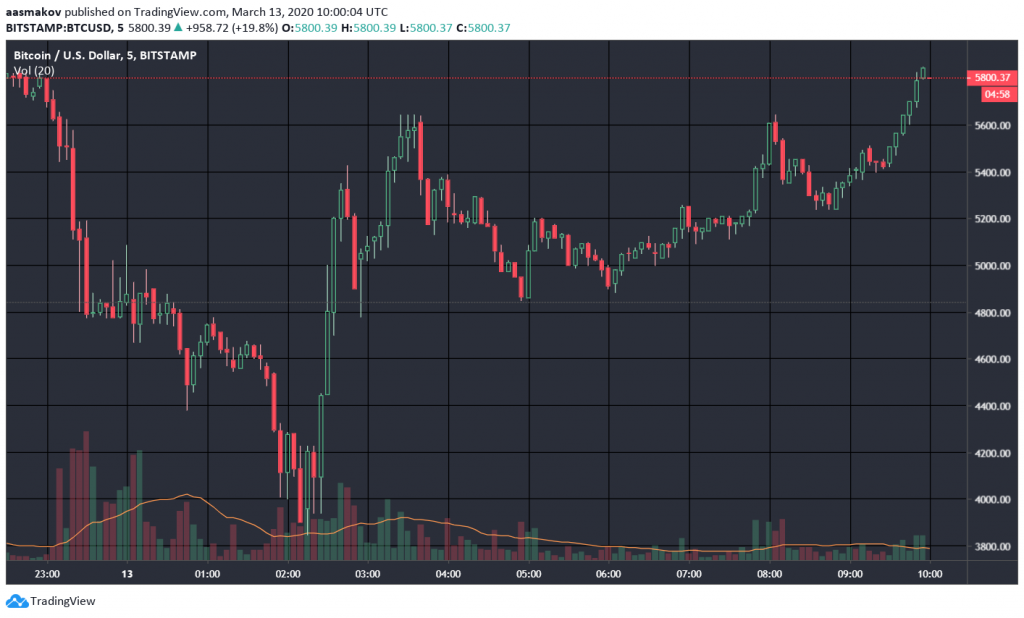 Dean of the Faculty of Economics of the Synergy University Mikhail Yakunin on the situation in the marketsю On world markets:

“The authorities of the USA, EU, Japan, and China flood the market with money, providing liquidity. Most likely, in March the Fed will lower the rate again, which should have a positive effect on the markets. In the short term, this may work, and a purely technical correction may occur, but on a farther horizon, the prospects remain uncertain. We need to wait for the positive news on the virus. Also, do not forget that in April we will have a wave of reports from companies that are likely to be below expectations, this could trigger a new round of decline.”

“The failed OPEC+ deal provoked an aggressive struggle for the oil market. The UAE is already offering its oil at a discount of $5–9 per barrel. Other oil-producing countries make similar concessions. An opinion exists that Russia exited the deal to destroy the shale sector and which must repay a large number of loans. But we should not forget that these loans are issued in the United States only under the condition of price hedging, and at least until the end of 2021, shale oil producers should not be worried about prices. But if this was indeed the goal, then we will have to live with current prices for years.”

“The Central Bank really has enough currency to support the current exchange rate. Additionally, it is now being helped by Gazprom, which is selling $2 billion in loan money. In the short term, I think the rate will be in the corridor of 70-75 rubles per dollar. If you own any rubles, then go to the bank and change everything for dollars.”

The Block CEO Mike Dudas noted that on Thursday, March 12, the largest gold price drop since 2013 was recorded. https://twitter.com/mdudas/status/1238396293245997056 Financial regulators in Spain and Italy announced that after yesterday’s collapse, they introduced a ban on opening short positions on a number of stocks. The ban applies to today's session and affects the shares of 69 companies in Spain and 85 in Italy. In addition, the British Financial Supervisory Authority (FCA) introduced a ban on short positions on certain shares of Spanish and Italian companies. Leading European indices meanwhile show a slight rise. 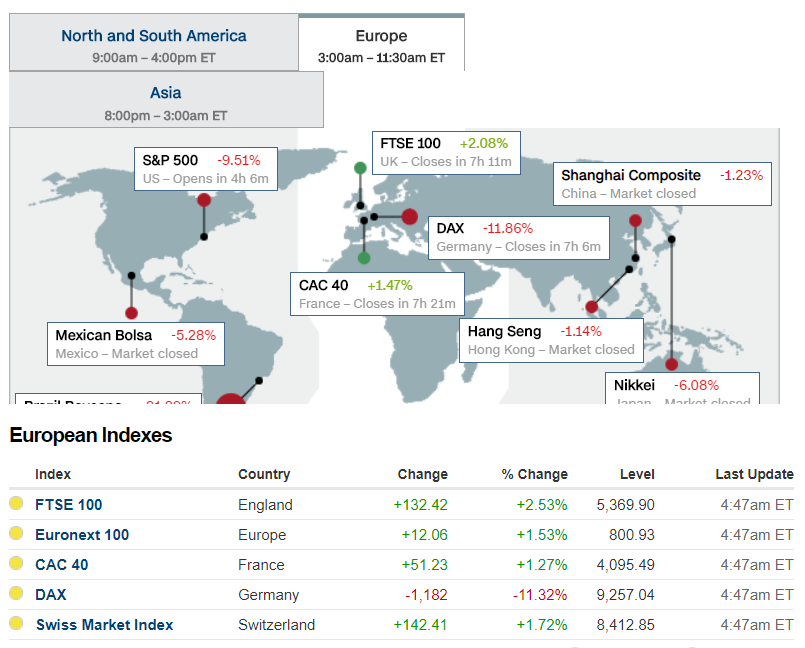 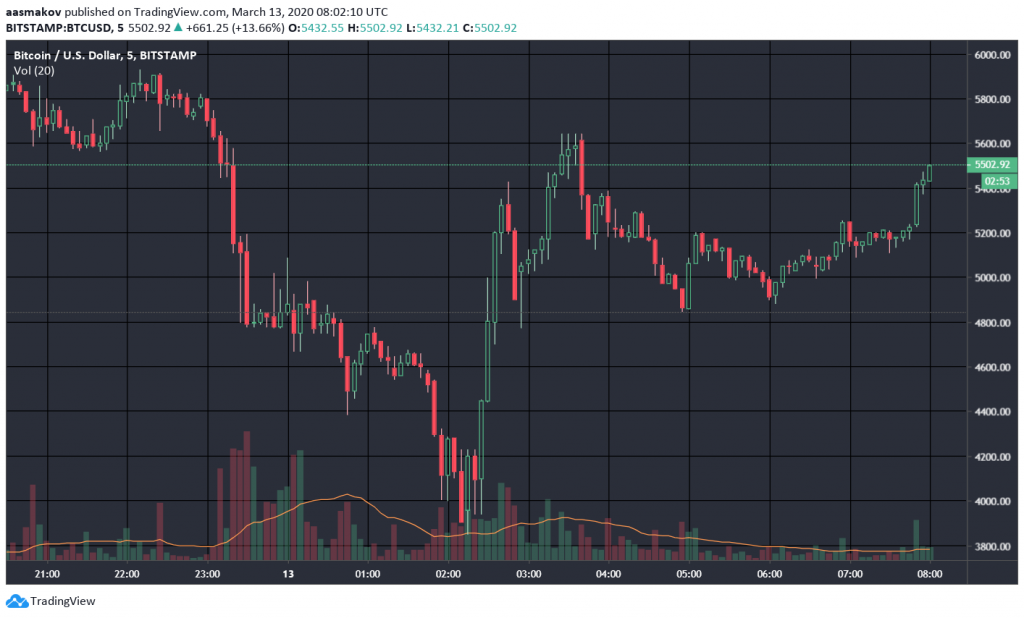 “Panic reigns the markets yesterday and today, players exit by stop-loss, and many are forced to close by margin call. There was a strong buyback at night, probably from a very large player or group of players. The traditional financial market is still heading for a full-blown crisis. The fall of Bitcoin gives a great opportunity to buy an asset at a bargain price for the first time since the end of crypto winter. A sharp rebound in the market clearly indicates that in the near future we can see compensation for at least part of the collapse of the last day.”

Asian markets followed the American ones. All major indices are in the red. The Japanese Nikkei recorded the largest daily fall since 1990. https://twitter.com/NAR/status/1238369109601067008 In Thailand, Indonesia and the Philippines trading is suspended. Bitcoin hash rate has recovered to 124 EH/s.

Source: Blockchain.com As of 7:16 UTC, the BitMEX insurance fund lost 1,627 BTC (4.6% of the total). https://twitter.com/lawmaster/status/1238363223537131520 Deribit Options Exchange was less fortunate. From $3.1 million, only $227,000 remained. https://twitter.com/lawmaster/status/1238359460537565186 According to Mike Novogratz, CEO of Galaxy Digital, Bitcoin has always been the projection of investor confidence, and at the moment they have no confidence in anything. When asked what will restore investor confidence, Kraken exchange’s very own Bitcoin evangelist Pierre Rochard recited the key characteristics of the cryptocurrency such as resistance to seizure and censorship and trustworthy healthy monetary policy. https://twitter.com/pierre_rochard/status/1238278678024523781 ShapeShift exchange co-founder Erik Voorhees claims Bitcoin and Ethereum are anti-fragile. In his opinion, Bitcoin remains a means of storing value, despite the collapse. Not everyone agrees, especially in the context of the Ethereum and DeFi ecosystem. https://twitter.com/TusharJain_/status/1238324672435011584 5:11 UTC. In a matter of minutes, Bitcoin has jumped to $5,200. Ethereum on Coinbase is traded at $122. Dan Tapiero, co-founder of 10T Holdings, has criticized those who say Bitcoin is not viable. https://twitter.com/DTAPCAP/status/1238314151312797696 As of 5:00 UTC, Bitcoin again fell below $5,000. Ethereum is close to $110. 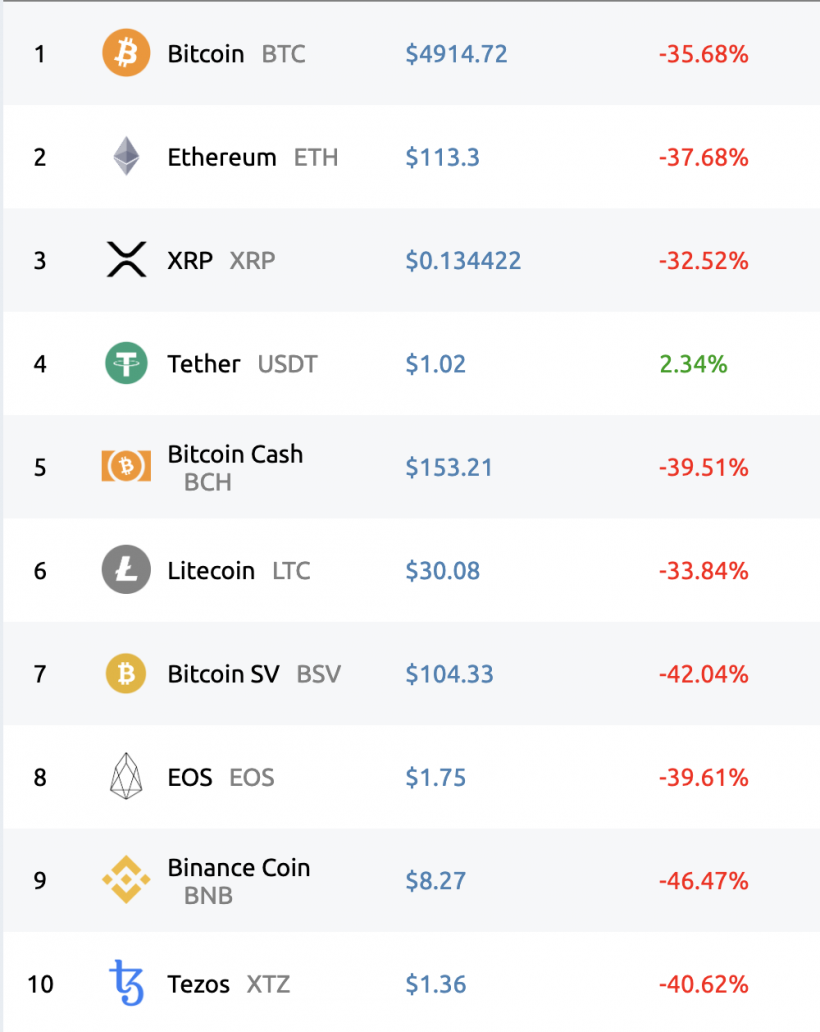