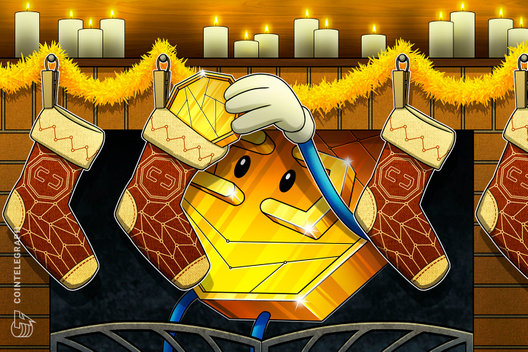 Crypto Santa has done his rounds for Christmas after checking his naughty and nice list. But which crypto players got coal this year, and which got presents?

On Christmas Eve, Crypto Claus did his rounds after checking the list to see who was naughty and nice. But who got some lovely presents after making a positive impact in 2019 — and who got coal for setting the industry back? Here, we take a look at the people and businesses who have had a year to remember — and those who have had a year to forget.

Some crypto players were resigned to getting coal rather early on in 2019. Right at the start of the year, John McAfee suddenly announced he was fleeing the United States after being indicted by tax authorities. This led to the bizarre announcement that he would run to become U.S. president while he was in international waters.

In the 12 months that followed, he held back on plans to reveal the real identity of Bitcoin creator Satoshi Nakamoto, told Cointelegraph that the CIA was harassing him, reasserted that Bitcoin (BTC) will hit $1 million in 2020, got arrested twice in the Dominican Republic, unveiled plans to run for the roles of U.S. president and British prime minister simultaneously, and launched an “Epstein Didn’t Kill Himself” coin.

While we’re on the topic of Satoshi Nakamoto, it’s likely that Crypto Santa was frowning furiously at Craig Wright’s antics in 2019. The controversial Australian entrepreneur has had quite a litigious year — not least because he has been trying to prove that he was the person who invented Bitcoin. In May, he filed copyright registrations for the Bitcoin white paper with the U.S. Copyright Office, but critics maintain that this proves very little. Wright also found time to sue crypto podcaster Peter McCormack and Bitcoin.com CEO Roger Ver for libel — with Ver calling him a “fraud and a liar” in a YouTube video.

But the real showstopper this year was the bitter case that pitted him against the family of his late business partner, Dave Kleiman. Wright was accused of stealing hundreds of thousands of Bitcoins that were rightfully Kleiman’s — and a court subsequently ruled that he should pay 500,000 BTC back. This prompted the embattled entrepreneur to challenge the ruling, questioning the judge’s power in the process. Although the two parties then embarked on extensive settlement negotiations, Wright later informed Kleiman’s estate that he was unable to finance the agreement, which was worth a whopping $4.5 billion at the time.

So… who else was in the running for Crypto Santa’s coal? Well, some would potentially be on his naughty list because of how their actions tarnished the industry’s image or slowed down its progress. There was Brad Sherman, a Democratic congressman for California who is violently opposed to crypto. This year, he called for U.S. lawmakers to outlaw cryptocurrencies altogether for fear that they could undermine the dollar. On Libra, Facebook’s proposed stablecoin, he claimed “Mark Zuckerberg is sending a friend request to oligarchs, drug dealers, human traffickers and terrorists.” Political rivals of Sherman have claimed his “goal is essentially to try to ban the internet.”

QuadrigaCX also retains its spot on the naughty list after December 2018’s bombshell announcement that $190 million in user assets was lost when CEO Gerald Cotten died suddenly. He was the only person in possession of the keys to the cold wallets apparently being used to store the funds. Over the course of the year, it emerged that these cold wallets were mostly empty anyway, and the Canadian company was officially declared bankrupt. Although Cotten’s widow has handed over $9 million in assets to compensate affected users, QuadrigaCX’s liabilities still run into many tens of millions of dollars. The murky circumstances surrounding the exchange’s demise have also fueled cynicism over whether Cotten is actually dead, with lawyers representing disgruntled investors asking police for the disgraced executive’s body to be exhumed.

There were countless other hacks, exit scams and incidents over 2019. Some were caused by lax security, but some — such as India’s Coinome and Koinex — blamed regulatory pressure as the country prolonged uncertainty by announcing plans to ban crypto and enforce 10-year jail terms, only to delay enshrining them in law.

Thankfully, Crypto Santa had plenty of presents to dish out this year, too. Some of those in line for a gift from Crypto Santa simply did a good deed — showing the world that the community can be a giving, generous place. Back in September there was the tale of Keith Mali Chung, otherwise known as the “African Bitcoin Bull.” The blockchain educator and advocate had inadvertently received “a huge sum of BTC from an unknown sender” — believed to be worth about $80,000 at the time — and launched a Twitter appeal in a bid to return it to the sender. Thankfully, his campaign succeeded, and a man who he had done business with before came forward to be reunited with his coins.

There has also been plenty of charitable giving over the course of the year. BitPay began offering its services to the Wikimedia Foundation, the organization behind Wikipedia, so the nonprofit could accept donations in Bitcoin and Bitcoin Cash. Binance, one of the world’s biggest exchanges, launched a campaign to provide two meals a day to more than 200 students and school staff throughout 2019 in the Ugandan capital of Kampala. Countless crypto organizations commenced fundraising drives following the Notre Dame Cathedral fire in France — including BlockShow and Binance. And it seems there really is an appetite for charitable donations in the community, with Fidelity Charitable disclosing back in August that it received more than $100 million in cryptocurrency donations since it began accepting digital currencies back in 2015.

Also on the nice list are countries that have adopted measures that provide legal clarity to crypto and blockchain users around the world. In the summer, Australia unveiled plans to exclude crypto from restrictions on cash payments, New Zealand ruled that cryptocurrencies are legal and subject to tax, and Portugal declared that Bitcoin payments and trading should be tax-free.

In the final quarter of the year, France announced that crypto gains will only be taxed if assets are converted into fiat — effectively meaning that crypto-to-crypto transactions will remain exempt. Meanwhile, the United Kingdom proclaimed that Libra has the potential to become “a systemically important payment system” if it satisfies some crucial provisions to be compliant with the law. Over in Germany, a new bill emerged that would legalize banks holding Bitcoin and other ditigal currencies from next year, prompting some to describe the country as a “crypto haven.”

As in politics, as in economics, as in global affairs, crypto and blockchain have had some celebrations and commiserations in the past 12 months. Learning lessons from 2019 could prove decisive when Crypto Santa is deciding who is on the naughty and nice list for 2020.