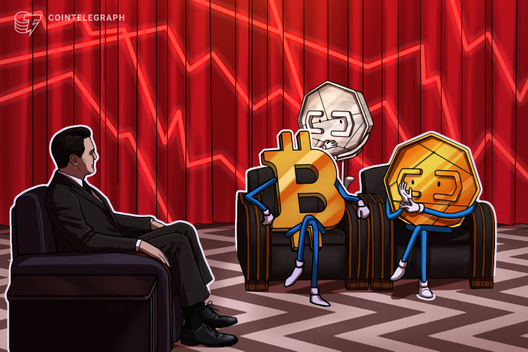 While Bitcoin price has been suggesting that the bottom has been found, there’s a good chance that a revisit of the $6,000s will occur in the near future.

Bitcoin (BTC) closed the week at $7,385, which represented a 1.71% reduction in valuation. The lows for the week were some 4.5% lower at $7,053. But a strong close meant that Bitcoin maintained the $7K handle throughout the week.

Looking at performance relative to its peers, Ether (ETH) and XRP both outperformed Bitcoin last week against the United States dollar, which is counter-trend to what has been seen in recent weeks. BCH and BSV have also both notably recorded double-digit gains.

As a result, BTC dominance fell around half a percent to a little over 68%. Bitcoin dominance peaked at 71% in September 2019 but is still up 33% for the year, illustrating the poor year for the alternative cryptocurrencies.

Bitcoin has started the new week down 1% at $7,300 having briefly broken $7,500 during late trading hours on Sunday. The weekly candle is that of a hanging man candlestick, which is found at the top of an uptrend and can be indicative of a reversal in price; and that’s ultimately what has been seen so far on Monday.

Price remains locked between the $6,400 and $7,600, which has been the case for the entire month of December, with strong buying interest and time spent below $7,000.

The highest volume node for the last 24 months on the visible profile volume range, or VPVR, is at the support of $6,400 and this will play an important role as losing this level could make way for a faster move to retest the 200-week moving average —currently around $5,000.

The 50 and 100-week moving averages remain crossed bullish, with the 50 week MA currently acting as resistance.

The $7,555 level is that of the monthly open and would be the target for the bulls to breach this week in order to close December with a bullish candle for the year. So this will be a key level to watch.

Overall, volume continues to decline as the price has been in a general downtrend, and this is considered as being a bullish divergence.

The weekly MACD continues to build the as yet unconfirmed bullish divergence, with the fifth consecutive week of higher lows on the histogram. But as the MACD is still below zero, and requires a cross with its signal line, it remains unconfirmed, but a positive sign nonetheless.

The RSI remains below 50, which is considered bearish. But it is showing a clear change in the momentum to the downside.

The one-day Bitcoin chart shows that price has had 4 attempts to break the $7,555 level during the month before being rejected.

Price action in $6,000s has been brief. Overall momentum is trending higher as can be seen in the MACD, which has trended higher for the whole month. But again, it remains below zero. So it has yet to have the key moving averages underpinning the indicator to cross bullish. The RSI tells a similar story, also trending higher off the back of a bullish divergence.

The 4-hour chart really highlights the $7,200 level, which has played the role of supporting price for most of December.

Funding rates on perpetual swap contracts have now resolved positive meaning the derivative market is generally bullish. This is in contrast to the start of the month and has previously been used by the contrarian in the market. Therefore, this may imply that the $7,000 level may need to be backtested.

The MACD is also showing some signs of a loss in bullish momentum as it looks set to cross bearish with its signal line.

The bullish case would be that the $7,200 level will act as support and help to complete the inverted head and shoulders pattern. The bullish target, in this case, would be $8,800, but the failure to retest the neckline of $7,600 indicates that the pattern may have already failed.

The bearish outlook is that Bitcoin is repeating the pattern seen earlier in the month where the move late on Sunday is effectively a retracement into a short opportunity for the bears, which are in control at these prices as demonstrated by the lower high.

Should the previous pattern repeat, a retest into $6,800 would be likely and would be significant, as another rejection here would mean a higher low and support the idea that there is unsettled demand in the $6,000s.

The move higher late over the weekend resulted in another CME gap at $7,290. Coincidently or not, these gaps have been getting cleared with the week with a high level of consistency so it is likely that the futures price will need to come back to this level over the course of the week.

A positive note for both the CME and Bakkt is that the buying volume in the low $6,000s is significant to the extent that it was relatively higher than that seen on spot exchanges.

This is an interesting development as it may be indicative of demand from new market participants and supports the ideas mentioned earlier. 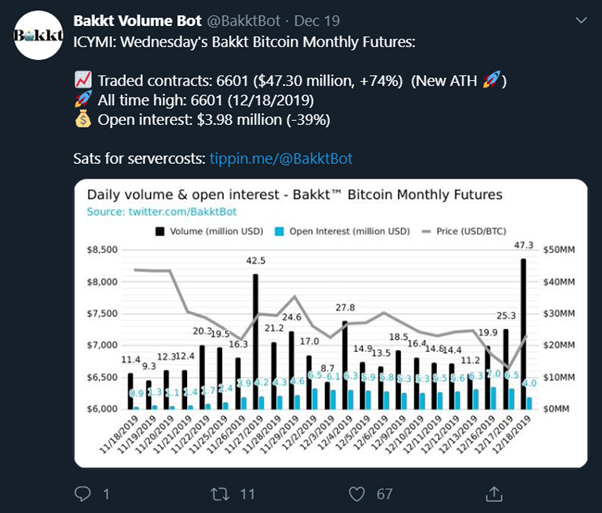 Bitcoin volumes are showing that prices in the $6,000s are attractive to buyers or people covering short positions.

The bullish moves late into the weekends are a positive sign. But the failure to break $7,600 so far implies that more work needs to be done before Bitcoin price can begin its journey back up to $8,000, with it being likely that more business needs to be done in the $6,000s.

The views and opinions expressed here are solely those of the author and do not necessarily reflect the views of Cointelegraph. Every investment and trading move involves risk. You should conduct your own research when making a decision.