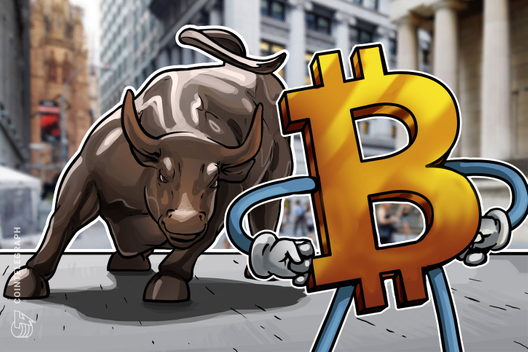 Bitcoin bulls and bears are set to have a key battle going into the weekend at a critical price level that could set the tone for the rest of the year.

Bitcoin (BTC) is trading up around 2% at $7,600 on the back of the European session this morning, which is where it has been consolidating for a couple of days. With the weekend looming and the month of November coming to a close, Bitcoin price action is at a critical point and is likely to result in volatility over the weekend.

As has been witnessed recently, Bitcoin has continued to dictate the valuation placed across the cryptocurrency market as a whole. Ether (ETH) and EOS, for example, have outperformed Bitcoin but ultimately continue to swim in the wake of the number one crypto asset.

Bitcoin dominance has reduced slightly to 68% but looks destined to retake 70% in the near future. 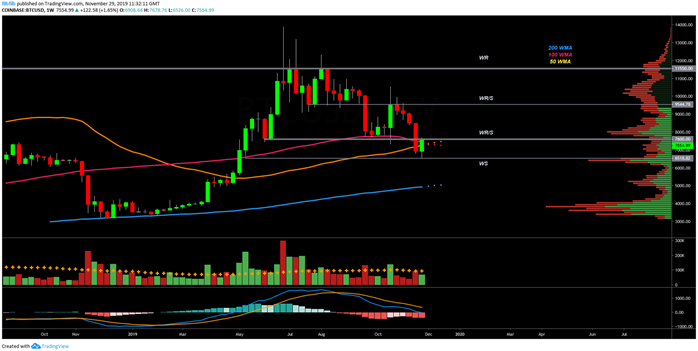 Bitcoin is currently trading right up against weekly resistance at $7,600, which was previously long-term support that was lost last week. The $6,500 price level has a relatively high level of volume history as seen by the node on the VPVR and has yielded a 10% bounce so far this week but has yet to break the key $7,600 level.

Clearly, such a strong response is encouraging for the bulls but ultimately — from a neutral point of view — Bitcoin is currently retesting the breakdown, which the bears will see as an opportunity to sell into.

Meanwhile, the MACD is still overall trending down and has crossed bearish. Bitcoin ultimately needs to break weekly resistance and find support over the weekend to count as being a strong bullish week for bitcoin, given the previous week’s drop. 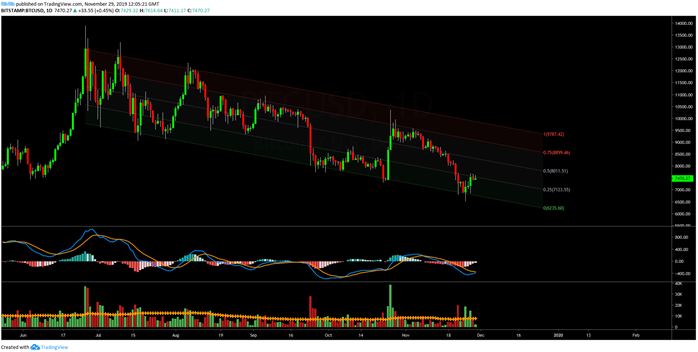 The daily chart shows Bitcoin is still trending down and did bounce off an important diagonal trendline. The diagonal 25% line is also now holding down the price as resistance. It’s worth noting the upside that occurs when this level is taken out and suggests a fast move to test $8K is not out of the question.

The Daily MACD clearly shows a trend change towards the bullish side, with a MACD cross due to happen. However, it is occurring below zero, which isn’t as ideal as it would be if it were above in bullish territory. The underlying moving averages are yet to cross.

The 4-hour Bitcoin chart paints a clearer picture of how critical current price action is — it is right up against the weekly resistance and local horizontal resistance. The completion of the head and shoulders pattern would imply that prices north of $8,200 are possible. But similarly, a breakdown here would also likely result in a fast move back to 7K in the middle of the range below, if not all the way to retest $6,500.

The MACD implies that the bulls are starting to lose momentum, which is contradictory to the cross on the 1-day MACD. This emphasizes the need to wait for confirmation on the next move and the risk associated with taking a position at the moment as it is not entirely clear what the market wants to do next. 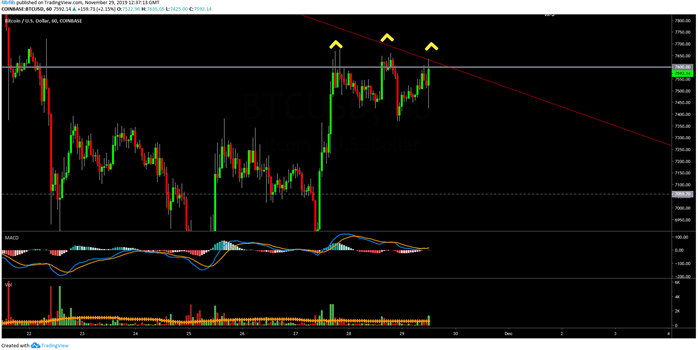 The one hour chart again shows that there is a struggle going on between the bears and bulls.  Additionally, there’s an ominous-looking head and shoulders topping pattern right up against resistance.

Should the bulls fail to find their feet early into the weekend and the top breaks down, the target for this move would be the middle of the range below at $7,000.

The 1-hour MACD is about to turn bullish above the zero line so this does mean that the bulls are most likely to have some fight in them even at resistance.

Due to the nature of the price action reaching a tipping point, there will be traders already positioned and others who are ready to buy or sell breakouts on either side. This liquidity waiting on the sides amid incomplete patterns that are playing out at very important levels of support and resistance would imply that this weekend will be extremely important. In other words, volatility can be expected over the weekend that could result in some interesting price action.

A close for the week in the range-finding support above $7,600 would suggest trading for December will be in the $7,600-$9,500 range and a failure here would imply that December will conclude the year in a new range below.

Traders are likely to be busy this Friday and into the weekend.

The views and opinions expressed here are solely those of the author and do not necessarily reflect the views of Cointelegraph. Every investment and trading move involves risk. You should conduct your own research when making a decision.