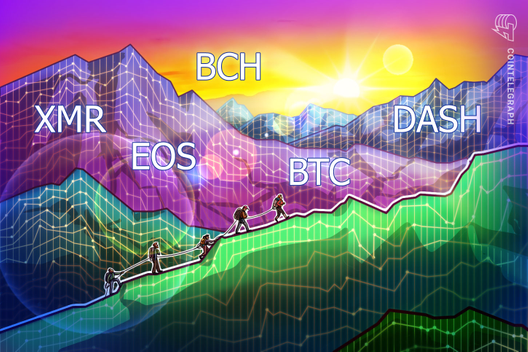 Can the top performers of the past week build on the gains and turn bullish? Let’s look at the charts.

There are several important events lined up in the next few months that are likely to be positive for cryptocurrencies. The first such event is the launch of Bakkt futures later this month. We expect volatility to pick up just before the launch and remain high for the first few days as both bulls and bears attempt to establish their supremacy. Let’s study the charts to locate the critical levels, which will confirm the resumption of the uptrend.

Monero (XMR) was the best performer among major cryptocurrencies by a wide margin. It has rallied close to 15% in the past seven days. Does this rise indicate the start of a new uptrend or is this just another pullback that will be sold into? Let’s analyze its chart.

The XMR/USD pair has formed a descending wedge pattern. If the price breaks out of the wedge, it can move up to $97.9733 and above it to $120. Therefore, aggressive traders can buy on a close (UTC time) above the wedge and keep a stop loss of $65.

Contrary to our assumption, if the price fails to sustain above the wedge, bears will again try to break down below it. Such a move will be a huge negative and can result in a fall to $40. Though there is minor support at $60, we expect it to be broken.

In the short term, both moving averages are flat and the RSI is just below the midpoint, which points to consolidation.

EOS is the second-best performer and has risen over 10% in the past seven days. Is this a dead cat bounce or the start of a sustainable rally? Let’s analyze its chart.

The EOS/USD pair is currently correcting in a descending channel. The 20-week EMA is sloping down gradually and the RSI is in the negative zone, which suggests that bears have the upper hand.

However, bulls are defending the support at $3.1534. Though this level has been tested thrice since early March of this year, the bears have not been able to break below it. If bulls can propel the pair above the descending channel, it will be a positive sign. The next level to watch on the upside is $4.8719. Both moving averages are located just below this resistance. Hence, a breakout of $4.8719 will indicate the start of a new uptrend and can be purchased with stops below recent lows. The target objective will be a move back to $9 in the medium term.

The second-largest fantasy sports service Fanduel has added support for cryptocurrencies, including Bitcoin Cash (BCH) for members to top up their accounts. One of the world’s biggest Bitcoin Cash conferences was held in Townsville, Australia. The town has several outlets that support digital currency payments, which shows increased crypto adoption. On the fundamental front, a lead developer of Bitcoin Cash said that the network was unable to process large blocks of transactions having a size of two megabytes or larger.

The BCH/USD pair is attempting to bounce off the neckline of the head-and-shoulders (H&S) pattern. This shows that bulls are defending this support level. However, unless they propel the price above the right shoulder at $360, we anticipate bears to again attempt a break below the neckline. If the pair plummets below the neckline, it will complete the bearish H&S pattern, which can drag the price to $105.

On the other hand, if bulls push the price above $360, it is likely to pick up momentum and rise to $515.35. A breakout of this level will invalidate the bearish pattern, which is a bullish sign. Traders can initiate long positions on a breakout and close (UTC time) above $360 with stops below the neckline.

The dominance of Bitcoin (BTC) has remained close to the 70% mark in the past week. This steady rise in Bitcoin’s dominance has left most altcoins struggling. Cantering Clark, a hedge fund manager and co-founder of Blockroots, believes that altcoin rally will start after Bitcoin breaks out to new highs or if its dominance drops below 40%. However, with the launch of Bakkt nearing, the spotlight is likely to remain on Bitcoin for the next few weeks. A recent event that caught the eye was a mystery transaction of 94,504 BTC. This made the recipient’s wallet the richest Bitcoin address that does not belong to an exchange. Will Bitcoin volatility increase in the next few days? What are the critical levels to watch on the upside and downside? Let’s look at the chart.

We like the sharp bounce in the BTC/USD pair from the trendline of the symmetrical triangle. This shows accumulation by bulls when the pair dips to the strong support of $9,080. The cryptocurrency can now rise to the downtrend line of the symmetrical triangle. A breakout of the triangle will be a positive sign that has a target objective of $15,376.96. Therefore, traders can buy on a close (UTC time) above the downtrend line and keep a stop loss of $9,000. The up-sloping moving averages and RSI above 50 show that bulls hold the advantage.

Our bullish view will be invalidated if the price reverses direction from current levels or the downtrend line of the triangle and plummets below $9,080. Such a move will dampen sentiment and can result in a fall to the $7,451.63–$7,337.78 support zone. A breakdown of this zone will reduce the probability of a new high in 2019.

Dash (DASH) has partnered with IQ CashNow, which specializes in cryptocurrency ATMs. This move will add over 1,000 additional merchants who accept Dash and integrate over 250 additional ATMs. The Dash Investment Foundation plans to start investing on behalf of the Dash network. While the fundamentals look good, what does the chart project? Let’s take a look.

In the last week of August, the DASH/USD pair dipped below the 78.6% Fibonacci retracement level of the rally, which is a bearish sign. Usually, this is followed by a complete 100% retracement, which in this case will be a fall to $58.49. A breakdown to new yearly lows will be a huge negative.

Currently, bulls are attempting a pullback, which will face resistance at the previous support turned resistance of $95.4264. Above this level, the next resistance will be at the downsloping moving averages. Due to weakness in the cryptocurrency, we suggest traders remain on the sidelines. We will wait for a new buy setup to form before proposing a trade in it.

The views and opinions expressed here are solely those of the author and do not necessarily reflect the views of Cointelegraph. Every investment and trading move involves risk, you should conduct your own research when making a decision.

The market data is provided by the HitBTC exchange.